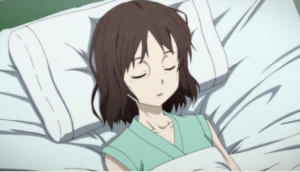 Having been born in the 90’s, I can only recall one cartoon from my childhood that attempted to explain HIV/AIDS in a comprehensive and open manner to a young audience. It was ”Captain Planet” Season 3, Episode 11 “A formula for Hate” which aired on November 21, 1992. I feel it is very rare that cartoons address death not related to violence. I was very surprised to see that Sword Art Online 2, released in July of 2014 tried to de-stigmatize HIV/AIDS by introducing a character born with the disease whose CD4 count “crashed” as a child and progressed to AIDS. This is revealed in Season 1, Episode 23 “The End of the Journey” as the character is seen as what would be wasting syndrome.

As a public health professional, to me it’s a major step in social acceptance, as it gives an additional perspective that one can be born with the disease; removing the stigma of sexual deviance that was once associated with HIV/AIDS.

Difficult topics often undergo some form of review before being published or aired. I can only hope that society continues to cultivate understanding in young audiences through addressing difficult topics early on in comprehensive manners just as it was done in SAO and Capitan Planet.